All eight of the Lazy Lake safe locations with gold bars

Epic Games has introduced a new in-game currency for Fortnite Chapter 2 Season 5 which allows players to purchase and upgrade loot via NPC vendors. Therefore, it’s important for players to know how to gain as much of the new in-game currency as possible. There are many ways to earn golden bars, but the safes hidden throughout Lazy Lake offer the highest single yields of anything so far. Players that can manage to find a safe will be rewarded with 150 golden bars. In this guide, we’ll cover all eight of the safe locations in Fortnite that you can find scattered throughout Lazy Lake.

The first thing to know about these safes is that they have low spawn rates. Each match will vary, but you could see anywhere between zero to two of them spawn. For this reason, other players may forget to check, so it never hurts to see if one has gone unnoticed when passing through the area. The best way to get one of these, of course, is to land near where they spawn at the beginning of a match.

Seeing as Lazy Lake is a popular location for players to land, you’ll want to plan accordingly. It should be relatively easy to check one or two locations before things get too crazy, but you’ll probably have to fight your way to the rest. Therefore, the best way to go about checking for safes is to land at one of the outer buildings in Lazy Lake. Carefully work your way around, checking each potential spawn while also keeping eyes on enemy players. I like to start at the north side where the two houses are linked by the underground passage. Then you can work your way around Lazy Lake in a counter-clockwise pattern before checking the center locations last. 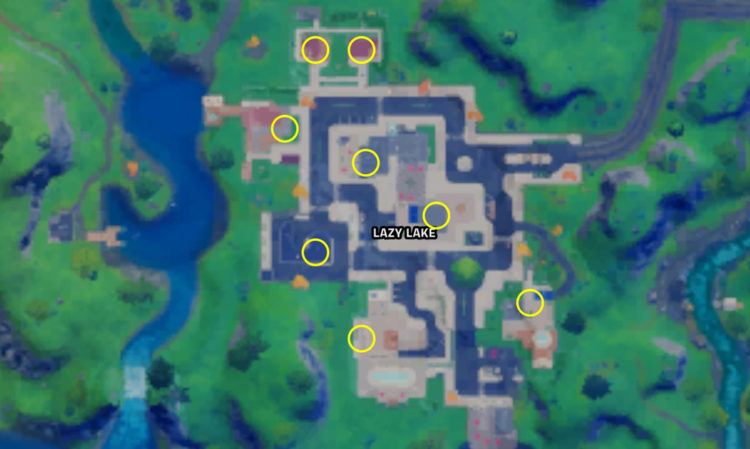 We can follow the strategy I just recommended to work through the different locations one by one. Starting off in the eastern house on the north side of Lazy Lake, you can find the first Fortnite safe location. It is located on the second floor of the house in the bedroom. Moving westwards to the second house, the safe location can be found in the basement among the workout equipment.

The next place you will want to check is the home which is southwest. It’s the same home that sits near Lazy Lake. The safe spawn is located in the bedroom on the ground floor and you will see it right when you open the door. Next up is the gas station, which can house a safe in its second floor room. Just take the stairs up and you can’t miss it. 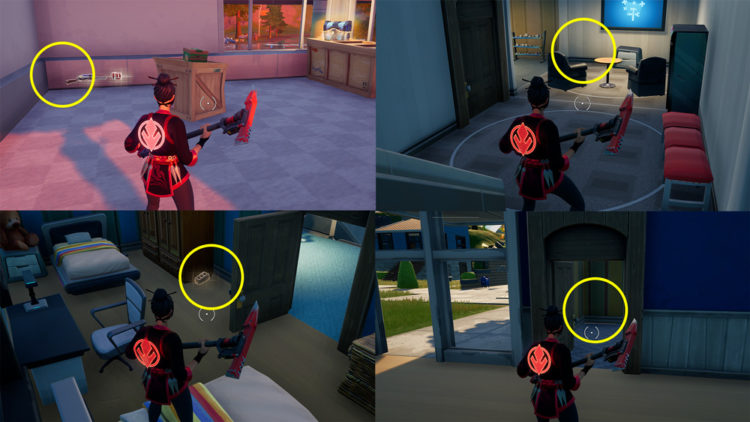 The next location will be in the hotel-style building on the south side of Lazy Lake. Just enter via the first floor and look for an office that’s somewhat across the hall from the elevator. The safe will spawn right behind the desk in the corner. Moving on to the south east side of the map, there is a modern home with a pool. You will find the safe in the main bedroom on the second floor.

For the next Fortnite safe location, you will need to move into the giant building in the center of Lazy Lake where the car dealership is. Make your way to the top floor and you will find the safe in the corner of a waiting area. The final safe spawn is located in the other large building just north of the car dealership. Just like the previous safe spawn, this one is also located on the top floor. Enter through the west side of the building and climb the stairs. On the top office floor, you will see three side-by-side offices. The safe will spawn in the center one. 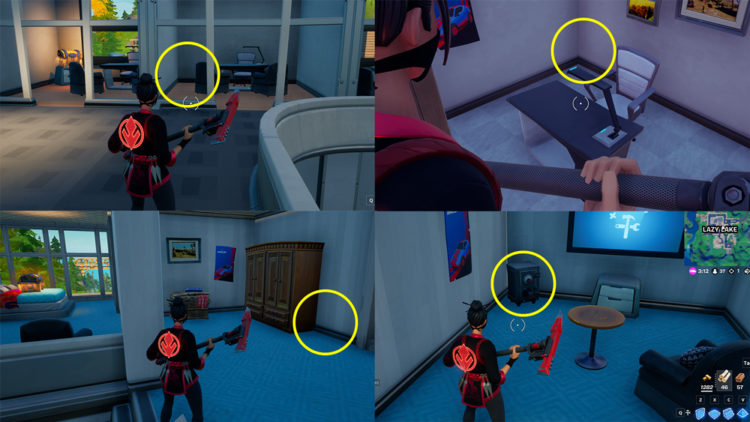 As you can see by these pictures, I was only able to find one safe during my playtime.

Fortunately, finding the safes is the only hard part. These can be opened with the touch of a button, netting you 150 well-earned gold bars. Just remember, you can only find safes in the standard playlists where gold bars spawn. If you want to preview these locations via the Battle Lab or Team Rumble, go for it. Just don’t expect to find anything besides empty safes.

Hunting for safes in Fortnite is certainly fun, and we’ve found all the spawns around the island since writing this initial guide. You can head over to our Chapter 2 Season 5 guides and features hub and scroll down to the safe locations list to find more guides on where else they spawn. In addition to that, you can check out other ways to get on top of your game. There’s a full list of NPC locations and the Quests they offer, detailed explanations on new gameplay mechanics like Quests and Bounties, info on exotic weapons, and weekly challenge walkthroughs.